This is a free event 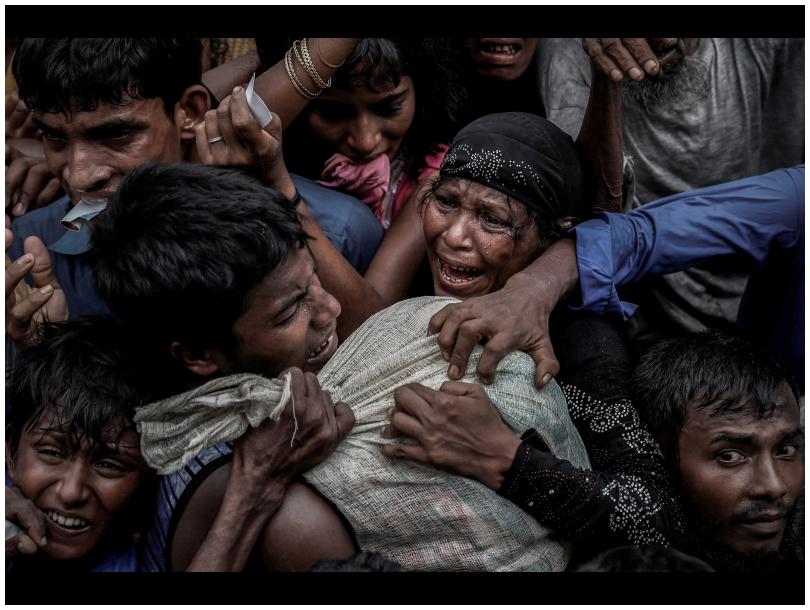 Belfast Exposed is delighted to present a solo exhibition by Pulitzer Prize winning Northern Irish photographer Cathal McNaughton who travelled to Cox's Bazar in 2017 to document the plight of the Rohingya people who were fleeing a deadly crackdown by Myanmar's army on Rohingya Muslims, forcing hundreds of thousands across the border into neighbouring Bangladesh.

Belfast Exposed is delighted to present a solo exhibition by Pulitzer Prize winning Northern Irish photographer Cathal McNaughton who travelled to Cox's Bazar in 2017 to document the plight of the Rohingya people who were fleeing a deadly crackdown by Myanmar's army on Rohingya Muslims, forcing hundreds of thousands across the border into neighbouring Bangladesh.

The Rohingya people are a stateless Indo-Aryan ethnic group who predominantly follow Islam and reside in Rakhine State in Myanmar, formerly known as Burma. The Rohingyas’ face a gruelling ordeal as they risk everything to escape a military offensive which the United Nations has described as a "textbook example of ethnic cleansing". After their traumatic journey they arrive at already overcrowded camps in Bangladesh filled with makeshift shelters. Exhausted, starving, wet and caked in mud, these refugees scramble in crushing crowds for aid while security officers endeavour to keep order. Many are suffering from malnutrition, sickness or injuries, and with limited access to food, water and medical help, many of the weak and vulnerable die.

The Rohingya genocide is a series of ongoing persecutions by the Myanmar government against the Muslim Rohingya people which began in October 2016 and is still ongoing as of now. Recently the UN's top court ordered the Buddhist-majority country to take measures to protect members of its Rohingya community from genocide, however, the army in Myanmar insists they are fighting Rohingya militants and denies any systematic human rights abuses.

Cathal McNaughton stated “Documenting this crisis is a harrowing process. The thing you can't appreciate in the photographs are the noises when thousands and thousands of people are fighting for their lives…. You see humanity at its most basic in front of you. Children fighting adults for food, adults stealing food and aid from children, it's very hard to take in….  To see these people being beaten back from basic necessities - even though if the guards hadn't done so there would be mass casualties - it's a very surreal environment and not something you can be prepared for."

Deirdre Robb curator of the Rohingya exhibition commented “At Belfast Exposed we consider it is important to shine a light on global issues of profound concern and importance. The extraordinary photography taken by McNaughton demonstrates not only the human cost of conflict but also highlights the vital role photojournalism can play in revealing it. This work is powerful and captivating, yet challenging in content for audiences to engage with, nonetheless it is important to give the public access to the raw, honest photographs presented in this exhibition”.

Cathal McNaughton will be delivering a Masterclass workshop on Saturday 28 March, the final day of his exhibition. The masterclass is a unique workshop combining real world assignments alongside professional instruction in technical and conceptual issues that enable participants to sharpen their critical thinking, research and technical skills. If you are interested in booking a place on this Masterclass workshop, click on the link below.